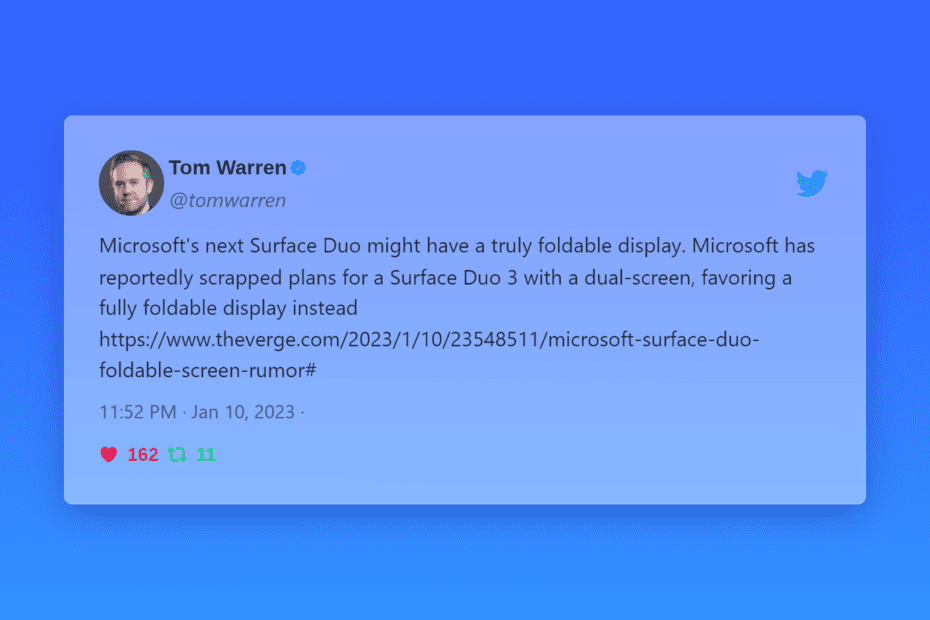 Microsoft’s Surface Duo, a dual-screen smartphone, was one of the first folding phones to hit the market after Samsung’s Galaxy Z Fold. However, according to a recent report from Windows Central, the next Surface Duo, the Surface Duo 3, will not be a dual-screen phone.

Instead, it will have an internal folding display with an external cover display and a 180-degree hinge, similar to the Galaxy Z Fold, Vivo X Fold, and other mainstream foldable.

The report states that after nearly a year of experimentation and prototyping, Microsoft decided upon the dual-screen design for the Surface Duo 3, which would have come with taller edge-to-edge displays and wireless charging.

However, the project has been shelved, and the team is starting from scratch on the new “true” foldable Surface Duo 3. This is not the first time that Microsoft has considered a true foldable design for the Surface Duo, as the company has been exploring the foldable display option since 2021.

With the change in design, Microsoft may abandon the “Duo” branding for something that coincides more with the foldable form factor. The report suggests that the development team is putting considerable effort into software to differentiate the coming Surface Duo from the rest of the Android foldable.

Microsoft is reportedly working on delivering an “ecosystem experience” among its Android phones and Windows PCs, similar to what is offered on iPhones and Macs.

Windows Central also reports that Microsoft wants to expand its lineup of Android smartphones and has been experimenting with different form factors.

The company has readied prototypes for several traditional smartphone designs that may exist alongside the foldable smartphone, making it an enthusiast’s product. However, nothing has been confirmed yet.

The Surface Duo 3 was expected to release later this year in the fall, but now with the pivot, there is no word on when the next Surface Duo will arrive. We may not see a new Surface Duo from Microsoft for the second year in a row.

Overall, Microsoft’s next Surface Duo will be a folding phone with an internal folding display an external cover display, and a 180-degree hinge, similar to the Galaxy Z Fold and other mainstream foldable.

Microsoft may also abandon the ‘Duo’ branding, and focus on differentiating the software experience of the phone from the rest of the Android foldable.

Samsung Is Releasing 2 Ultrawide QD-OLED Gaming Monitors
Apple Developing 'AirPods Lite' to Counter Lower-Cost Wireless Earbuds
2023 Xbox Series X/S Exclusive Games May Not Available on Xbox One
People Could Become Human Antennas To Harness The Power of 6G In Future
Windows 11 Fails To Impress Steam Users
Google takes on ChatGPT with Bard and shows off AI in search
ChatGPT - A Blessing Or Curse For Internet?
What is generative AI?
AI Art Wins Destiny 2 Fanart Contest, Sparks Debate
Apple Didn't Release Any New Macs This Quarter - Here's Why
Could AI be the answer to our content needs by 2025?
Google's LaMDA Vs. ChatGPT - 3 Pros & Cons